"I choose to attack Earth."

Raphael is the best friend and aide of Archangel Michael. He later takes on the position of Commanding Officer when Michael is demoted.

Raphael comes from a middle-class background. He entered military school through a scholarship and there, he met and fell in love with Michael. They became best friends but Michael's twin, Lucifel, was extremely possessive and became a nuisance to the development of their relationship. He eventually started dating Gabriel due to sharing the same values when it came to marriage. Unable to move on his feelings for Michael, he proposes that he and Gabriel get married so he can become nobility and spend his life by Michael's side.

Raphael has long, platinum blond hair that he usually keeps in a high ponytail. He is extremely tall and has narrow, green eyes. His wings are white. 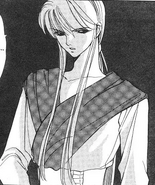 Raphael with hair down

Raphael is a level-headed person. He is rarely seen losing his bearings or allowing his emotions to cloud his judgement. At times, he comes across as cold and unconcerned. In fact, Kagetsuya was convinced that he hated him. Raphael finds amusement in flustering certain people. He particularly enjoys riling up Kagetsuya and occasionally, Michael. Like most residents of Eden, he has a deep disdain for the Earthian and opts to destroy them when given the chance.