"Because it is the most beautiful thing in the world to love someone." - Michael on Chihaya and Kagetsuya

Lord Michael, or Archangel Michael, is Chihaya's adoptive father. He plays the role of the commanding officer for Eden's military.

Michael comes from an aristocratic background. He attended the same military school as Gabriel and Raphael, along with his twin sister, Lucifel. He and Raphael became close friends despite their differing financial backgrounds. Michael indulged in an incestuous relationship with his twin throughout their school life and up until her disappearance.

Michael has mid-length curly, honey-blond hair. His eyes are sapphire-blue and his wings are, naturally, white. In his younger years, he wore round reading glasses. 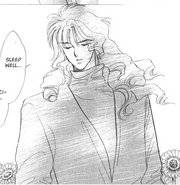 Raphael described Michael as "laid-back" and "easy to approach". He is indeed very amiable and only seems to get worked up when Raphael pokes fun at him or when Chihaya's well-being is involved. He is not always upfront about his feelings, once going as far as to injure himself so Raphael would spend the day with him.

Michael is also largely impartial. Unlike most angels, he does not hold a deep disdain for the Earthian, though he is willing to destroy them if needs be. In school, he never saw Raphael's financial background as a point of contention and was baffled by the pride of other nobles. He does not regard Chihaya's mutation with an ounce of distaste.

Michael claims to despise the weak of heart.