"Doesn't the Earth belong to the Earthian? Doesn't it belong to all who love it?"- Chihaya to Lord Raphael, Vol. 3 chpt. 1

Chihaya is the protagonist of Earthian. He is a plus checker and avid defender of the Earth's inhabitants. Much of the series is given from his perspective.

Eden is a planet populated largely by angels with pale hair and white wings. As the only angel of Eden to be born with black hair and black wings, Chihaya faced some hardships in his younger years. He was abandoned due to his abnormal features, but luckily, he was able to find acceptance in the residents of the St. Micheal's Orphanage. Due to the tanking birthrates on Eden, all children, including orphans, were well-cared for. However, adoptions were quite rare, and with his taboo features, Chihaya had no hope of getting adopted.

Chihaya when he was finally adopted

Surprisingly, he manages to get adopted by Archangel Michael during his teenage years, mostly due to his top score in a military entrance exam. Later, he becomes a plus checker who seeks the good in humans, because of his love for humanity.

Over time he interacts with Lucifers and feels a kinship towards them because of their hair and wings. Chihaya and his partner Kagetsuya fall in love, even though homosexuality is forbidden in Eden.

Chihaya is a young boy, around 17, with straight black hair and deep purple eyes. His body is slender and on the short side. In his human form, he tends to keep his hair at neck-length, while in his angel form, his hair is long enough to reach his waist (he tends to wear it in a high ponytail). His wings are black. 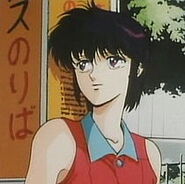 Despite his own scepticism, Chihaya is seen as attractive by many of the people around him. When Kagetsuya first meets him, he thinks of him as "breathtaking" and "a beautiful person".

In the OVA, Chihaya is seen wearing a sleeveless, red button-up with teal collars and pale yellow pants.

Chihaya is a light-hearted and amicable angel who has a deep, unconditional love for the Earthians. This allows him to look beyond their violent and destructive behaviour into the very core of their hearts. He believes that Earthian are "joyful, fascinating and unforgettable" and generalizing them all as awful people is a disservice. He often comes across as naive and careless, but he is actually quite intelligent, at least, academically. He maintains the top grade at his school. He is emotional, a bit of a crybaby, and feels deeply for others.

Chihaya and Kagetsuya met at military school. Kagetsuya was the upperclassman who directed him to the registration area, defended him against a bully and then reprimanded him for not standing up for himself. Though there is some friction between the two (mostly from Kagetsuya), Chihaya admits early on that he likes Kagetsuya. They eventually become checking partners and grow very close. So close, in fact, that they are forcefully separated as partners due to growing suspicion that their relationship was too intimate. Homosexuality is a crime on Eden, after all.

Initially, Chihaya accepts the orders gracefully, but after a short vacation to Earth, he caves and goes to request their partnership be reinstated. He is told that he needs to persuade Kagetsuya's new partner, Sayaka. Sayaka is difficult, so Chihaya challenges him to a fight. When it escalates to a challenge to duel, Sayaka, Chihaya and Kagetsuya (who got caught in the middle), get thrown into an isolation chamber. Sayaka finally backs down after two days in isolation with the two.

Shortly afterwards, Kagetsuya and Chihaya go on a C Holiday. While there, they confess their love for one another and have sex.