These are the angels born from Eden. Majority of them have fair-coloured hair and white wings. They possess various powers, as seen in Kagetsuya's ability to heal and bird-call and Chihaya's ability to create storms.

Chihaya is referred to as a perfect mutation. Unlike the majority of the citizens in Eden, he was born with black hair and black wings. His dark features were initially viewed negatively, but as The Black Cancer epidemic rises and the waning birthrate on Eden becomes a growing problem, they start looking to his body for answers. He turns out to be the only angel to rapidly evolve the mutation.

The Black Angels are a mix of both Earthian and angel DNA. They are more powerful than both humans and angels and all of them have black hair and black wings. 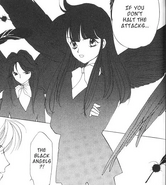 When they are first introduced, they are only two generations into their existence. Elvira, a first-generation black angel, explains that immunity to The Black Cancer occurs randomly in the firsts. However, the second generation of black angels has 100% immunity. As offspring between Earthian and angels increase, the possibility of contracting Black Cancer decreases.